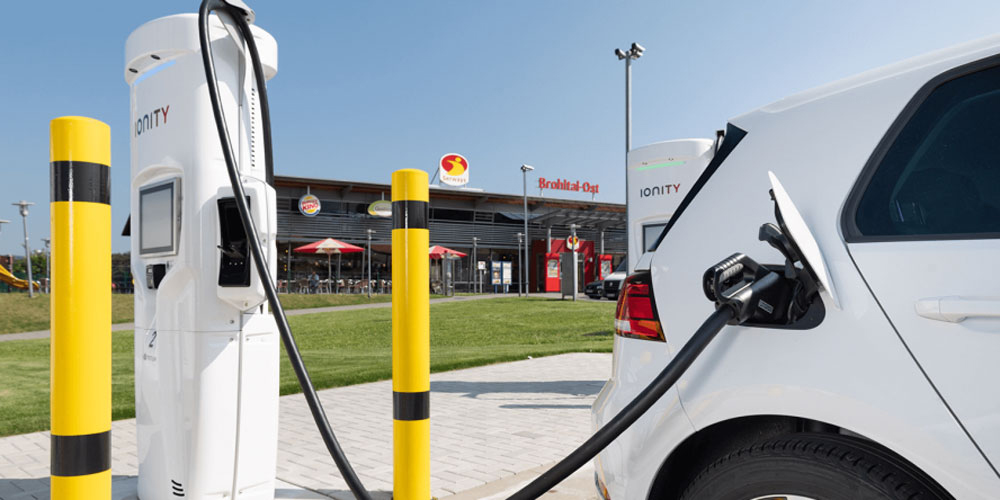 EV charging networks are set for a rapid expansion in both Europe and North America, in efforts to meet the expected increased demand for all-electric vehicles in the years to come.
While currently seeing a fragmented market with numerous third-party companies offering charging solutions, often with limited networks or compatibility issues between vehicles, two major players have emerged in recent months with plans for pan-continent charging networks.
IONITY, a joint venture between BMW Group, Daimler, Ford and the Volkswagen Group, has begun rolling out fast-charging stations throughout Europe, with more than 70 stations either already operational or currently under construction.
The company, which has also signed agreements with oil giants Shell and ENI to build chargers at their fuel stations, has laid out plans to build a total of 400 charging stations by 2020.
Each of the chargers are capable of delivering up to 350kW of continuous power, which is the equivalent of turning on 3,500 100W lightbulbs at the same time.
Initial pricing has been determined at a flat-rate of €8, or the equivalent currency, for each charge in the EU.

According to Frank Plaschka, head of marketing & brand for IONITY, the company aiming to offer "anxiety-free" travel for EV drivers, in order to erase the pre-conceived notion of range anxiety: “We are seeing the new generation of electric vehicles offering range, comfort and performance at a similar level to conventionally powered cars now becoming a viable alternative. We want to enhance the experience of EV travel, making it simple and enjoyable. The future is electric and our goal is to provide a charging experience that is so good it creates a new generation of e-mobility advocates."

Electrify America, a subsidiary of the Volkswagen Group of America, meanwhile, is being touted as the likely charging network to take the lead in North America.
Born out of the Volkswagen 'Dieselgate' settlement, the company has already installed more than 100 EV charging sites throughout the U.S., with 400 more planned, to total 2,000 fast chargers by July.
The stations offer both the CCS (Combined Charging System) and CHAdeMO plugs, which aside from Tesla's proprietary charging system, are the most popular standards worldwide.
Typical charging times range on the power delivered although new 800-volt technology in new cars, such as the soon-to-be-released Porsche Taycan, can add more than 60 miles of range in four minutes.
Porsche will offer three years of free charging on the Electrify America network for all of its Taycan owners.
While currently being the largest in the world with more than 12,000 stalls and 1,400 locations, Tesla's Supercharger network is limited to its own vehicles only, which will likely see both IONITY and Electrify America surpass those numbers in the years to come.